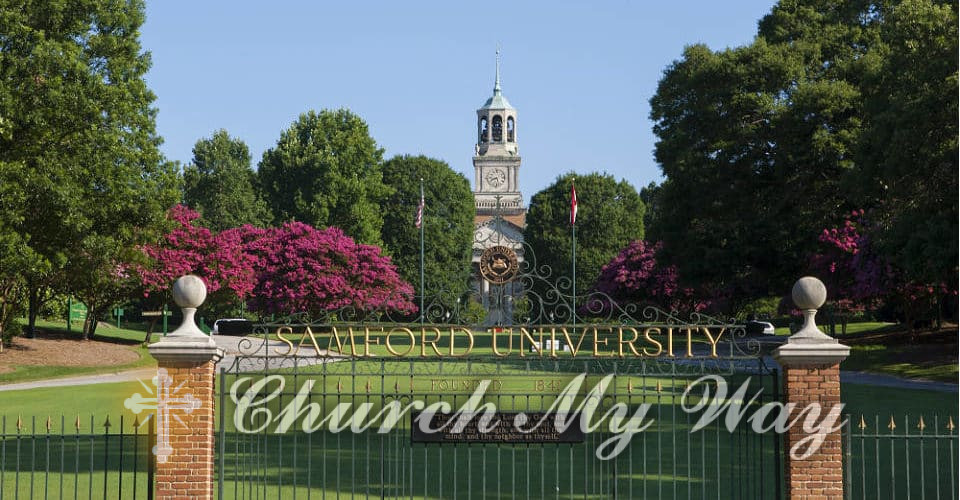 Baptist-affiliated Samford University has uninvited Pulitzer Prize-winning historian Jon Meacham to speak at inauguration ceremonies for the school’s new president, after anti-abortion activists created an online petition that has garnered nearly 1,000 signatures and the Student Government Association passed a resolution calling for the change.

Baptist-affiliated Samford University has uninvited Pulitzer Prize-winning historian Jon Meacham to speak at inauguration ceremonies for the school’s new president, after anti-abortion activists created an online petition that has garnered nearly 1,000 signatures and the Student Government Association passed a resolution calling for the change.

Meacham won the 2009 Pulitzer Prize for his biography American Lion: Andrew Jackson in the White House. He also has written acclaimed biographies of Thomas Jefferson, Franklin Roosevelt, Winston Churchill, and George H.W. Bush, as well as historical accounts of the Civil Rights Movement and a book on Jesus’ final words from the Cross.

He had been invited to speak at one of a dozen inaugural week activities next week. However, President Beck Taylor wrote to the university community Oct. 27 that due to objections, including from “elements of Samford’s Student Government Association,” Meacham will be rescheduled for a later date, “at a more appropriate time to an event not so closely connected to the symbolism of the inauguration.”

He explained: “This recommendation simultaneously recognizes the potential distraction the event may cause from next week’s celebrations and the importance of free expression and the exchange of ideas.”

An earlier news release from the university announcing the speech spoke effusively of Meacham’s credentials and insight: “Known as a skilled orator with a depth of knowledge about politics, religion and current affairs, Meacham brings historical context to the issues and events impacting our daily lives. His lecture will incorporate themes from The Soul of America: The Battle for Our Better Angels, a #1 New York Times bestseller, which examines the present moment in American politics and life by looking back at critical times in U.S. history when hope overcame division and fear.”

An anti-Meacham petition online at was created by Samford student Emily Kirby. As of Oct. 27, it had garnered 990 signatures. The site acknowledged the planned content of Meacham’s speech at Samford was not their concern but that the author’s previous support for Planned Parenthood is the problem.

“Although his plan for this lecture is focused more on social injustices, the problem lies within the beliefs and previous engagements of Mr. Meacham,” the website explains. “Jon Meacham is significantly involved with the Planned Parenthood organization. He has spoken at their fundraising events, his book is used for the Planned Parenthood fundraiser, and overall his beliefs and core values do not align with those of Samford University, as it is a Southern Baptist institution.”

“Overall his beliefs and core values do not align with those of Samford University, as it is a Southern Baptist institution.”

Removing Meacham as an inaugural speaker would “protect the core values and beliefs of Samford University,” the site says.

Unspoken in the objection is the fact that Meacham also is a well-known critic of former President Donald Trump, and Alabama is one of the reddest of the nation’s red states politically. As a school affiliated with the Alabama Baptist Convention, Samford for years has walked a tightrope to appease both the fundamentalist and progressive wings of Baptist life.

Separately, the university’s Student Government Association passed a resolution asking the administration to postpone Meacham’s lecture. Sources familiar with the sequence of events say the campaign against Meacham appears to have originated with anti-abortion groups outside the campus and then spread to some parents of current students.

Regarding the criticisms, Meacham most recently at an Oct. 6 fundraiser for Planned Parenthood of South Texas, held in San Antonio. Published reports of the event do not quote him speaking specifically about abortion but instead about the history of division in the nation and how that compares to today. He also at the same event in 2019.

However, apart from his critique of Trump, Meacham has maintained warm relations with both Republicans and Democrats. The reported: “While writing a biography of George H.W. Bush, he became so close to the 41st president and former first lady Barbara Bush that the family asked him to deliver eulogies at both of their funeral services when they died seven months apart in 2018.”

“Apart from his critique of Trump, Meacham has maintained warm relations with both Republicans and Democrats.”

In an interview with the Express-News after that 2019 event, Meacham was asked this question: “Your book The Soul of America reads as a response to what’s going on in politics today and as an attempt to reach Trump supporters. Do you think you did that?”

He replied: “I don’t know. I hope so. I use history to make my arguments because I think that’s the best chance to widen the aperture. If you come out and say to the 45% who voted for Trump, you’re wrong and you’re destroying American institutions, that’s not gonna work. My views of the president are not hidden, but that doesn’t mean my historical analysis is wrong. I do think we’ve been here before. It’s as if Joe McCarthy or George Wallace had become president.”

In November 2020, after the presidential election, MSNBC that Meacham no longer would be a paid contributor because he had been working with then President-elect Joe Biden’s transition team and had written speeches for Biden.

Meacham also joined a group of hundreds of historians who signed an calling for Trump to be removed from office after the Jan. 6 insurrection at the U.S. Capitol after Trump stirred up his supporters at a rally down the street.

“By fomenting violence against the Congress and seeking to subvert constitutional democracy, which resulted in the killing of a Capitol police officer and the deaths of several rioters, Trump has violated his oath of office to preserve, protect and defend the Constitution of the United States,” the letter said. “He is a clear and present danger to American democracy and the national security of the United States.”

Backing away from Meacham

In his email to the university community, Taylor said Meacham’s invitation to campus should not be construed as an endorsement of abortion.

“It has come to our attention that Mr. Meacham has previously spoken at a Planned Parenthood chapter event. Some in our community have assumed erroneously that Samford’s invitation by extension endorses any perspectives or viewpoints Mr. Meacham may have about the sanctity of life and abortion rights. I can assure you that no such connection should be inferred. Mr. Meacham is not planning to discuss these issues in his remarks.”

“Some in our community have assumed erroneously that Samford’s invitation by extension endorses any perspectives or viewpoints Mr. Meacham may have about the sanctity of life and abortion rights.”

At the same time, he emphasized “the vital importance of free expression and civil discourse in an academic community like Samford. Our mission as a Christ-centered institution of higher learning is to stand boldly at the intersection of society and the church and to convene important conversations about how to live faithfully in the world. That mission calls us to invite speakers and artists to campus who challenge our perspectives and who share wisdom and insights.

“Samford is a diverse community made up of faithful people who disagree on many important issues. Let’s enter those conversations courageously with a goal of learning from one another and extending the love of Christ to all. I believe we can do that well.”

Another historian who spoke at Samford

In the past, for major events on campus, Samford has welcomed a diversity of speakers, from conservative pastor Tim Keller and former First Lady Laura Bush to Washington Post columnist Eugene Robison, as well as Baptist figures from the right and the left.

In 2019, controversial historian spoke at Samford’s Percy Cook Ratliff Lecture Series. He has penned biographies of William Wilberforce, Dietrich Bonhoeffer and Martin Luther. While his work has been hailed by religious and political conservatives, it often has been skewered by other historians who have accused him of writing fiction.

Metaxas is an outspoken Trump supporter who perpetuated the Big Lie that Trump actually won the 2020 presidential election. Four years earlier, in 2016, he suggested that a Hillary Clinton victory in the presidential election would place America in the role of Germany embracing Hitler. He  Clinton as “Hitlery” — something he later said was a misunderstood joke.

No student protests were reported related to the Metaxas speech.

This is breaking news and will be updated as new information becomes available.

She was raised Southern Baptist, wanted to help a refugee child but was turned away because of her sexual orientation